The Ignorance of Reality 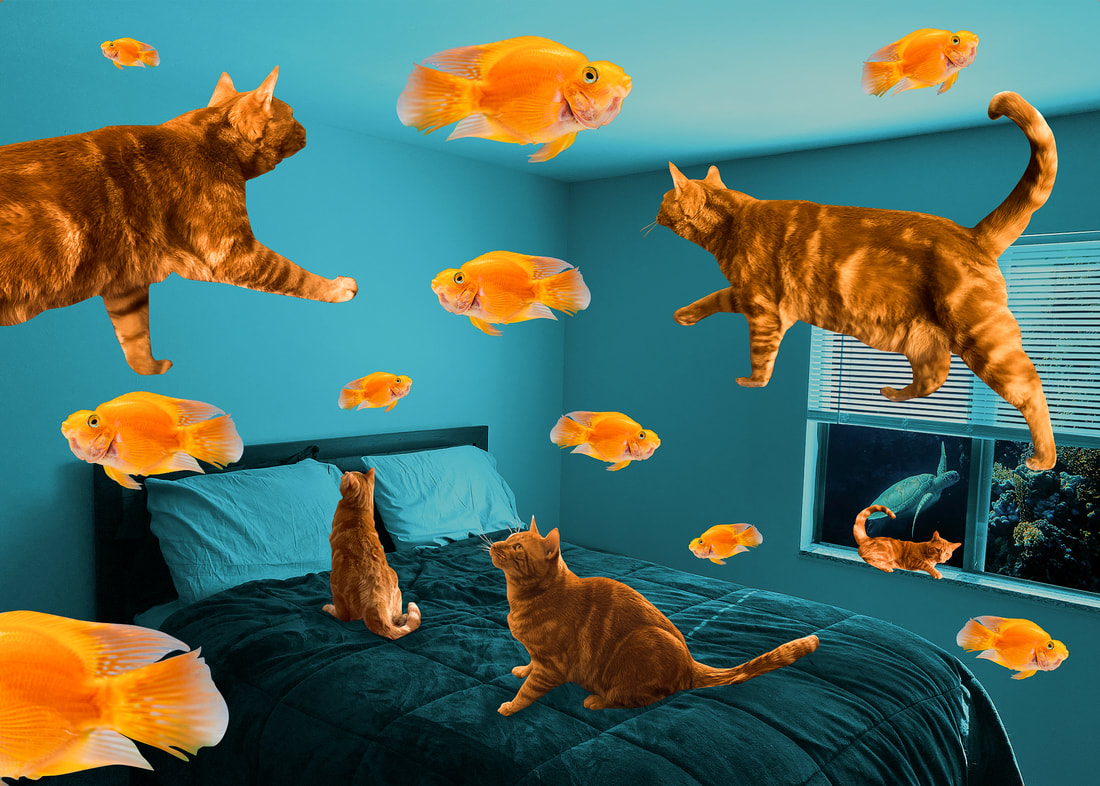 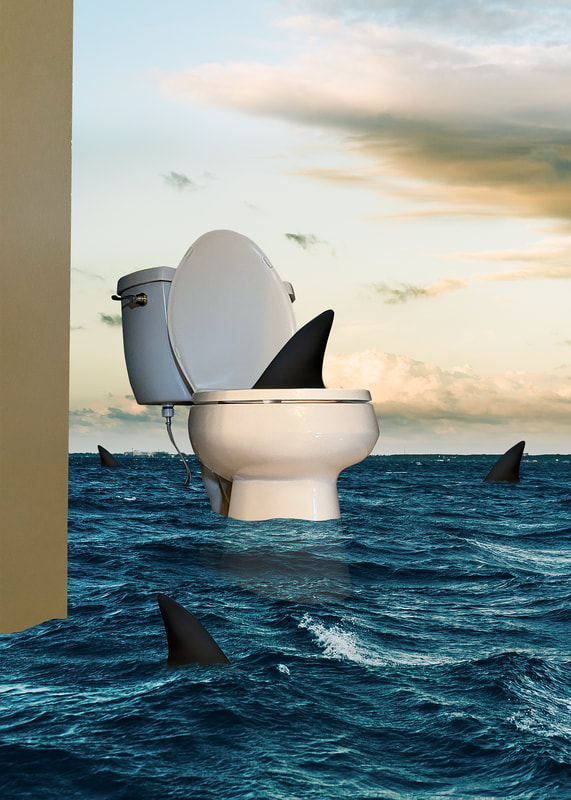 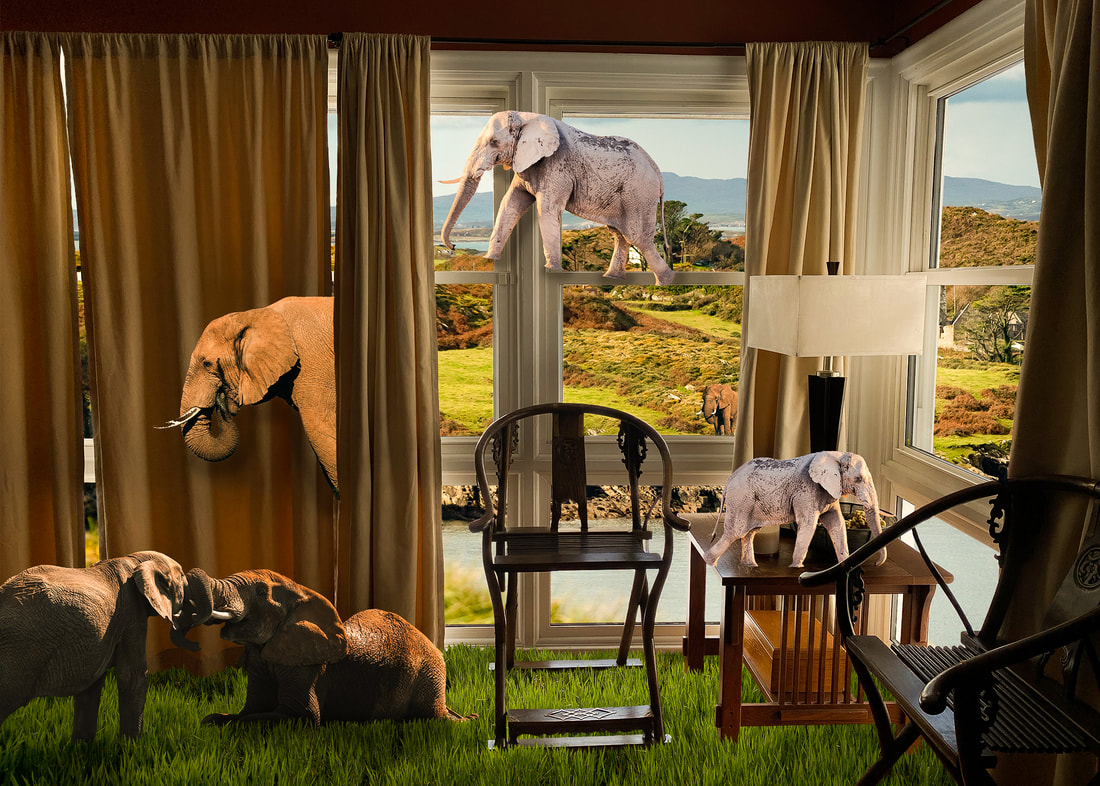 The Ignorance of Reality

For this series, the main theme was transformation, taking inspiration from Sandy Skoglund. Throughout this series, I captured mundane spaces that I interact with daily. My main focus for the transformation of these spaces was bringing the outdoors indoors. Bringing the elements of the natural world that exists outside indoors allows me to create a surreal hybridization of the artificial interiors and natural exterior world. This series of hybridized interior spaces allow me to vocalize the bigger picture behind this series, humanity’s ignorance of the reality that the natural world we live in will be destroyed if we don’t do our part to combat climate change and global warming.

In my first piece, Catfish, I transformed the interior of my bedroom into a bedroom that appears submerged underwater with cats and fish swimming among each other. I used juxtaposition, changes in scale, and layering to create a scene of multiple cats swimming after fish in a playful manner. The base image was taken from a high vantage point and the cats depicted were individually photographed. I combined mundane objects that juxtapose the natural environment that it would normally exist within. Catfish is a multi-layer piece that emphasizes the state of the world’s rising sea levels. While at first glance the piece is playful and dreamlike, it also makes the viewer reflect on how sea levels are rising with the potential future of submerging the natural world.

Feeding Frenzy Restroom showcases a bathroom that is partially submerged in a large body of water with a shark feeding frenzy occurring. The base image was a photo of my bathroom taken from the ground looking upwards. This perspective allows the viewer to feel as if they are in the middle of the water. Using sharks as my repeating element, I am able to showcase the common misconception that sharks will go out of their way to target humans. In reality, sharks are becoming endangered due to humans hunting them for their fins. Overall, this piece was a way for me to explore fantasy, but also allows the audience to reflect on their own perceptions of sharks and rising sea levels.

Elephant Living Room Reservation displays a living room with grass for flooring along with the repetition of various elephants. The elements I included throughout this piece are repetition, hybridization, and creating illogical spaces. By having the repetition of elephants, this piece visually represents the ignorance of the endangerment of elephants. The population of elephants has been rapidly declining as they become closer to extinction due to how they are illegally poached for their tusks. When the audience views this piece, I want them to envision a world without elephants and reflect on how they are illegally poached. While this piece is a playful fantasy, the audience is encouraged to reflect on the seriousness of the elements throughout it.

The final piece of this series, Butterfly Crossing, shows an entryway covered in grass and vines with butterflies flying. I used repetition elements along with the hybridization and juxtaposition of creating a butterfly reservation indoors. I want to elicit a playful and dreamlike scene that makes the audience feel like they can walk into this scene. However, similar to my other pieces in this series, I also want the audience to reflect upon how various butterfly species are becoming endangered.

Overall, throughout this series of work, the scenes I created display a playful and dreamlike scenes that evoke a much more serious undertone of endangerment of animals and global warming. Transforming mundane spaces into surreal dreamlike scenes with multiple endangered animals helps me call to action the underlying seriousness of endangered animals and climate change. We only have this one world, once it’s gone, there’s no getting it back. I hope that the audience will appreciate the beauty and dreamlike qualities of this series, but also take the time to reflect upon their own ignorance of how the reality of the world we live in is.